Pieces from the Collection

Pieces from the Collection

Get to know some of the pieces from the SMU Art Collection. These artworks are only a small selection from over 300 paintings, prints and sculptures in the permanent and loan collections. Chua Ek Kay (1947-2008) was one of Singapore’s leading contemporary Chinese ink painters. Through practice and theory that were in constant dialogue with 17th-century artist Shitao and 20th-century masters such as Huang Binhong, he evolved a robust personal take on the ink aesthetics. Lived experiences and sensibilities were echoed in his art and his active engagement in cultural discourse. He was deeply concerned with his own time and context and considered postmodernism, multicultural Singapore and critical regionalism in Southeast Asia in his writings, depictions of places and engagement with the arts community. Also a poet and calligrapher, his art is among the most celebrated in Singapore and his art historical importance is now receiving international recognition.

Born in China, Chua came to Singapore with his family in the 1950s. Here he studied Chinese ink painting under Fan Chang Tien. In 1991, he was the first Chinese ink painter to win the United Overseas Bank Painting of the Year Award. He later took up formal training in contemporary art, receiving a Bachelor of Fine Arts from the University of Tasmania in 1994 and a Master of Arts (Honours) in Visual Arts from the University of Western Sydney in 1995. He was awarded the Cultural Medallion in 1999.

One of Chua's most enduring themes was Singapore city streets. It was a subject with personal resonance for him, having lived in a shophouse along Upper Serangoon Road in the 1950s and attended Catholic High School on Queen Street in the 1960s. In these paintings, Chua often used sombre ink with occasional washes of faint colour. People were seldom depicted, giving the monochromatic paintings a sense of alienation and ambivalence as he witnessed the Singapore landscape undergo transition.

This artwork is from the Street Scenes Collection, a suite of 30 paintings donated by the artist in 2006 and currently housed at Lee Kong Chian School of Business. The Street Scenes Collection spans two decades of Chua’s artistic practice, from 1986 to 2006, and pictures narrow alleyways, temples of worship, old shophouses and historic sites in Singapore, Kathmandu, Yogyakarta and Jiangnan. In later years, he was keener on evoking feelings rather than rendering actual physical architecture. Particularly, his depictions of Singapore city streets—from Little India to Ann Siang Hill—are suffused with feelings of melancholy as he captures history passing through the once-familiar streets he has seen grown, thrived, and waned over time. 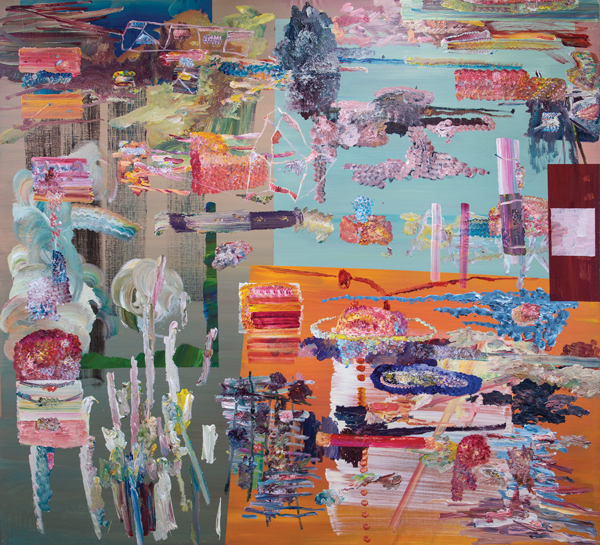 Ian Woo is an artist working in the language of abstraction. Influenced by forms of modernism, perceptual abstraction and the sound structures of music improvisation, his work is characterised by a sense of gravitational and representational change. He often uses the term ‘picture making’ when describing his position and approach, maintaining the discipline and evolvement of painting as a vehicle for pictorial reflectivity. Woo studied painting at the Kent Institute of Art and Design in Canterbury (UK) in 1994. He received a Masters in European Fine Art at the Winchester School of Art (UK) in 1995 and a research practice DFA with RMIT University (Australia) in 2006. His Doctorate research was based on the ability of abstract painting to express notions of a continuous presence.

The plane of his canvas contains different modalities of form, texture and hue as he plays and experiments with weight, lightness, translucency and solidity of colours and lines. But these are located across multiple points on the canvas, almost in a disparate and disjointed manner. His paintings demand close and slow absorption by the viewer, who might often be used to taking in things as a whole, to focus on a single small area at a time. Her eyes might move across horizontally or diagonally, above or below from one point to another in no fixed sequence. Having drawn in the viewer this way, she is then asked to open up to an unmediated visual experience. Indra Leonardi is one of Indonesia's leading portrait photographers. In November 2012, he had his first solo exhibition in Singapore titled “Bits of Me – Portraits by Indra Leonardi” at de Suantio Gallery, exhibiting a series of Indonesian Portraits he has been working on since the 1990s. The series features Indonesian thinkers, artists, business leaders and statesmen, and is a testament to both the photographer’s craft and his sensitivity to his subject.

This portrait is of Pramoedya Ananta Toer (1925-2006), a leading intellectual of the Indonesian left and a writer of fiction. He was taken prisoner two weeks after the abortive coup attempt in September 1965. Sent to a prison camp on the island of Buru, he was held there without charges for 14 years. It was there that he composed his epic tetralogy Buru Quartet, which traces the historical, social and political forces that came together to create Indonesia through the story of a young ambitious Javanese political activist and journalist who comes of age in the waning years of Dutch colonialism. Three of the tetralogy—“This Earth of Mankind", "Child of All Nations", and "Footsteps"—are available at Li Ka Shing Library.

On the exhibition caption for the artwork, Indra Leonardi says of the portrait:

“Having Pramoedya stand in front of his books was a way for me to tell the story of a great Indonesian intellectual and novelist. The window bars of his library evokes an uneasy link to Pramoedya’s past when he was a political detainee.” Shwe Thein attended the State School of Fine Arts in Yangon from 2001 to 2004, and is presently based in Yangon. His series of riverine scenes with traditional sailboats emerge from memories of his hometown Kyauk Taw, Rakhine State which sits along the Kaladan River. In his seascapes, sky, sea and boats meld together nebulously through the use of broad impressionistic brush strokes.

Nasirun grew up in a small remote village near Cilacap on the southern coast of Java, where folklores, wayang stories and mythologies were familiar and habitually recounted by elders. He graduated from the Indonesia Institute of the Arts (ISI), Yogyakarta, and has continued to be based in Yogyakarta where he creates expressive large-format paintings with imageries and motifs drawn from his extensive knowledge of Javanese wayang to reflect on contemporary social conditions.

Chair of the Punakawan (2008) features prominently the four much-beloved court jesters of Javanese wayang standing or laying atop a chaise longue that has more than a few extra pairs of legs. “Punakawan” comes from an Old Javanese word meaning “friends who understand”. And these four friends—Semar, Gareng, Bagong and Petruk—,who symbolise the common people, often make a cameo as advisors to knights, kings, heroes and gods, providing both comical relief and biting social commentary.